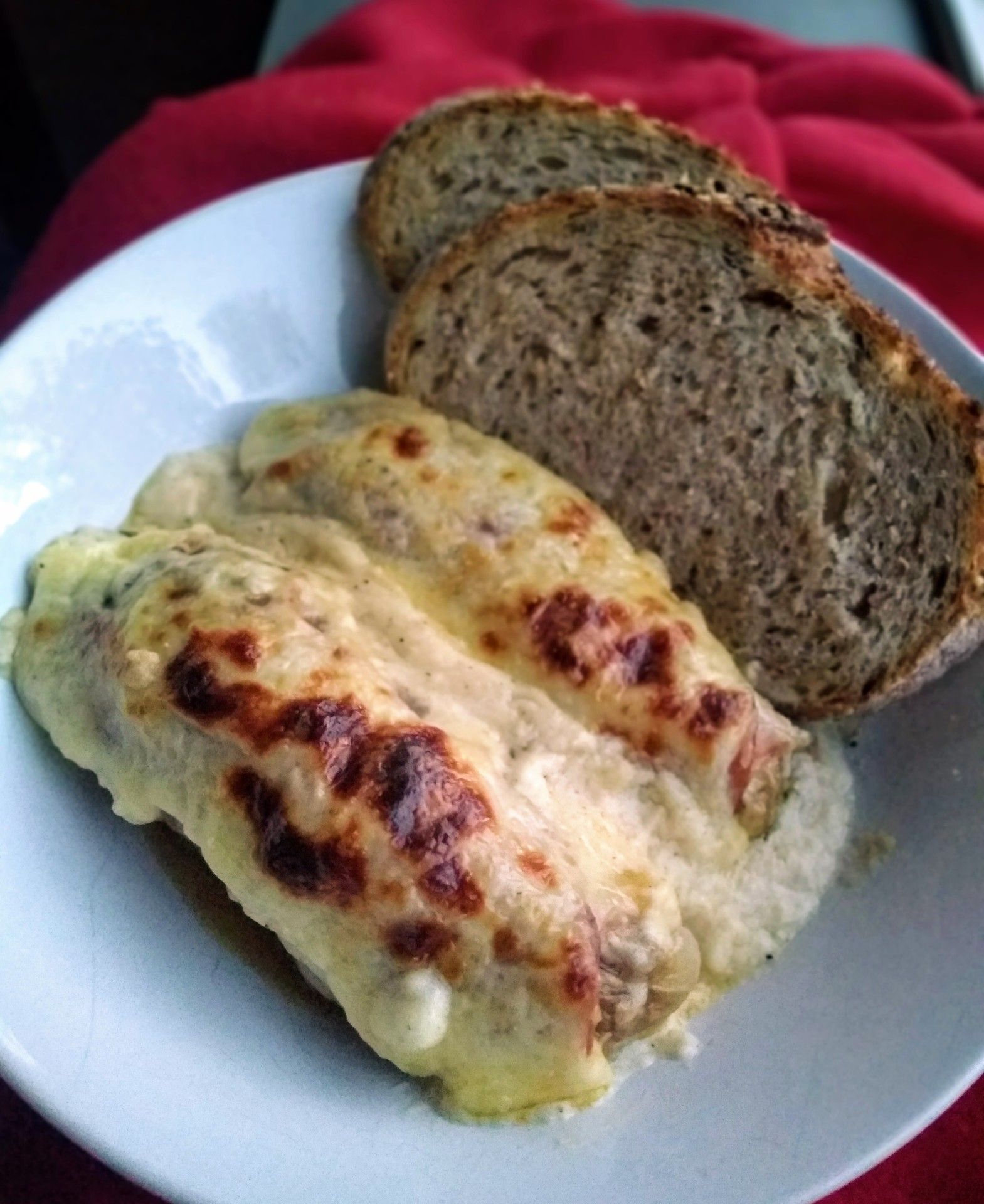 If you have never tried an endive...

Eaten raw, endive leaves are bitter and sharp and can add a kick to any salad. Cooked, those same leaves become sweet and extremely palatable. Inspired by Belgian cuisine, this dish takes caramelized endives, wraps them in savory slices of ham, and bakes them in a rich, cheesy béchamel sauce that browns perfectly in the oven.

If you lived on the North Sea coast of Belgium, you could get into your Volkswagen Golf and drive to the furthest point of the opposite end of the country in less than three hours. Along that short cross-country drive, you would be tempted by a plethora of opportunities to indulge in some quality food and drink: twice-fried, thick-cut fries with mayonnaise as a dipping sauce, beef stew marinated in dark ale, a bucket of freshly steamed mussels, deep-fried frikandel sausages, lightly glazed waffles with embedded sugar crystals, and Trappist ales made in monasteries under the close supervision of monks. Somewhere along the route you would also probably come across today’s featured dish: braised endive with ham and cheese, or “witloof met hesp en kaas” in Dutch.

The first time I tried endives was at a dinner party in France. For an appetizer, the host put out raw endive leaves along with various dips and sauces. Expecting a lettuce-like taste, I took a leaf, dipped it in a sauce, and took a big bite. Woah. Uncooked, endives are bitter! I enjoyed the flavor, but was quite surprised at the sharp flavor from such a light leaf. Before you begin, I double-dog dare you to eat an entire endive leaf.

A couple years later while living in Belgium, I discovered that the endive is a key ingredient in a traditional Belgian dish. I’ve developed this recipe based on what I observed and tasted in Belgium. To begin the dish, several endives are pan-fried in butter until the outer leaves are caramelized and the endive itself is nearly fork tender. The cooking length depends on what you prefer. If you want a firmer texture with a present bitter flavor, cut down the cooking time and stop once the outer leaves are just caramelized. I choose to cook the endives until they are practically completely tender. Again, it’s up to you.

If you’ve never made a béchamel sauce before, don’t worry. Think of a white gravy that might be served with biscuits, and you’re practically thinking about a béchamel sauce. First, equal weights of butter and flour are cooked together to form what is known in the culinary world as a roux. Then, milk is stirred into the roux and is heated until the sauce is thickened. At this point, you have a basic béchamel sauce. Start making the sauce and adding it to other basic recipes and you’ll be the talk of the town, you fancy chef. For this recipe, you’ll add a few more ingredients to the sauce to enhance the flavor and to make it cheesy.

So you’ll have your caramelized endives, your rich béchamel sauce, and some ham slices. Time to bring the whole family together. Each endive gets wrapped up in a ham blanket. The endive-ham rolls are then placed in a baking dish, which is then doused with that fancy sauce you made. The whole thing gets tossed into the oven and remains there until the top begins to brown. At that point, it’s dinner time. Grab a loaf of bread, plate those creamy, ham-wrapped endives, and dig in.

Eaten raw, endive leaves are bitter and sharp and can add a kick to any salad. Cooked, those same leaves become sweet and extremely palatable. Inspired by Belgian cuisine, this dish takes caramelized endives, wraps them in savory slices of ham, and bakes them in a rich, cheesy béchamel sauce that browns perfectly in the oven.