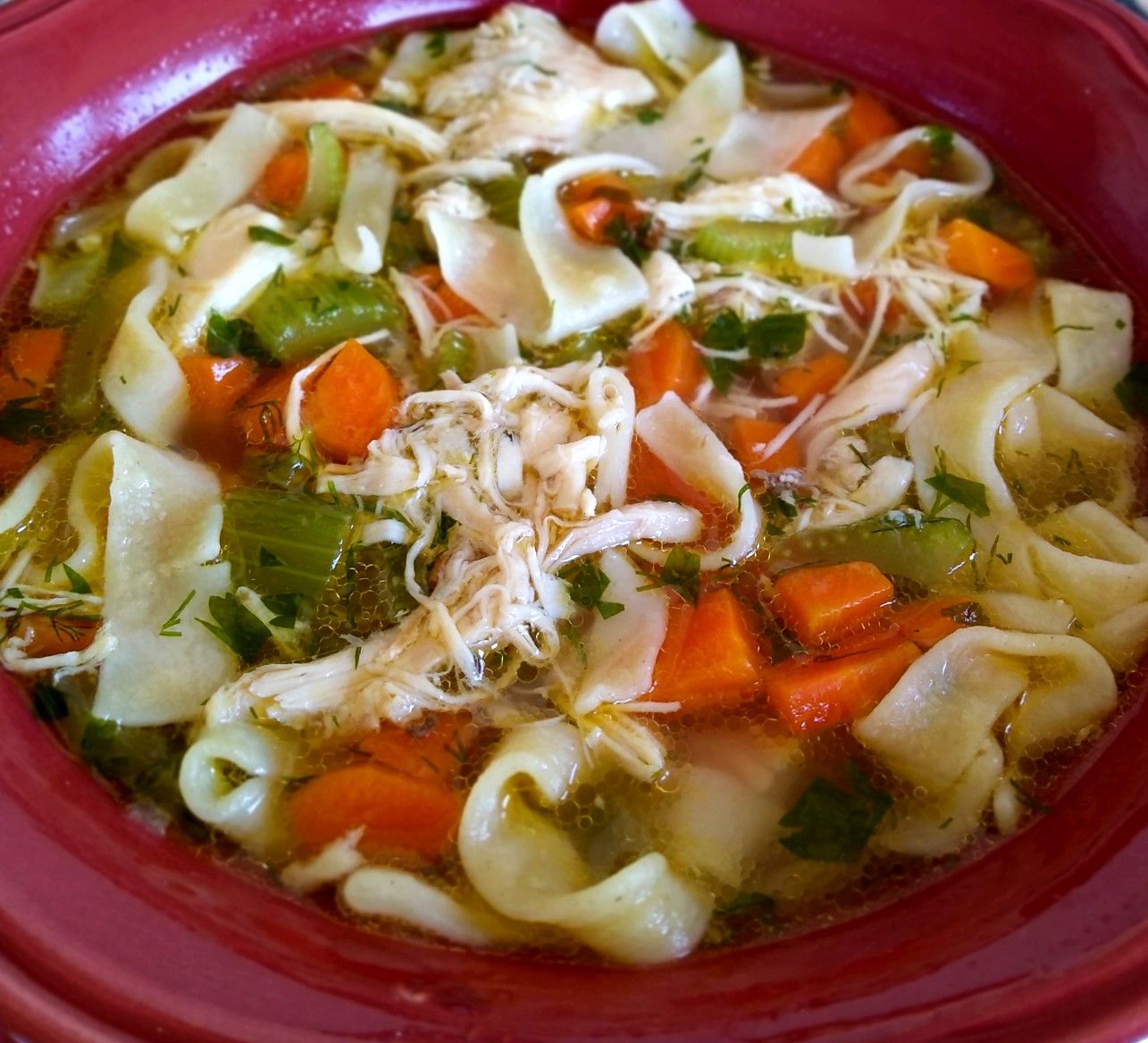 Chicken noodle soup for the soul with ample free time.

You don’t have to be under the weather for chicken noodle soup. Simmer a chicken to make homemade broth, roll out dough for fresh, hand-cut egg noodles, and bring it all together with vegetables and herbs to produce a hot bowl of soup for a wintry afternoon.

There is an episode of the ‘90s cartoon series Arthur where Arthur gets sent to the school nurse because he starts hallucinating about a blue elephant in art class. Whoa. He finds out he has chicken pox and spends the next few days at home. Grandma and his parents give him the royal treatment with chicken soup, an oatmeal bath, juice with a crazy straw, and breakfast crepes with sparklers stuck in the top. D.W., Arthur’s sister, declares her jealous feelings toward her brother’s royal treatment by shouting, “When do I get to drink with the crazy straw?”

The idea to create this recipe came earlier this year when I was reading a book about recipe development. The author suggested that one of the best exercises for becoming a better recipe developer is to take a classic dish, like chicken noodle soup, and to make your own recipe for it. Months went by and the author’s suggestion lingered in my memory. One day during a recipe brainstorming session I decided to accept her challenge and started plans for the dish you are about to prepare.

Just a heads up - this is a somewhat time intensive and hands-on recipe. Find a day this winter when you have several hours of free time, put some tunes on the speaker, fill your mug with a hot drink, and camp out in the kitchen while you make a stellar chicken noodle soup.

I’ve divided the recipe into three parts: the broth, the noodles, and the final soup. I’ll mention a few things about each section.

Skip the shelves of cans and boxes of chicken broth and head to the poultry aisle. You are going to make today’s broth with a whole, raw chicken. Handling raw chicken, simmering it on the stove for two hours, and finally spending the time to hand-separate the meat from the bones requires effort. Is it worth it? I absolutely think so. Maybe it’s not realistic to make homemade broth everytime you want soup, but it’s a real treat for that special-occasion bowl of chicken noodle soup.

The good news is that you don’t have to just sit and stare out the window while the chicken is simmering. The noodles also require a bit of work, so you can get a head start on the process while the chicken cooks. These are the classic egg noodles you find in many chicken soups. Like the broth, you are also making the noodles from scratch. In my opinion, the difference between these fresh noodles and dried, packaged noodles is an even greater contrast than the difference between the homemade chicken broth and the canned version. If you for some weird reason had to take a shortcut, don’t take it with the noodles. You’ll never forgive yourself, trust me.

After you’ve made the noodle dough, roll it out as thin as possible without tearing the dough. When the noodles cook in the boiling water, they will grow significantly. It won’t be the end of the world if you don’t roll the dough out super thin, you’ll just end up with some meatier noodles in the final bowl of soup. My experience with noodle making is minimal and I’ve never used a pasta roller, so take my advice and instructions with a grain of salt. If you are a noodle master and have special equipment, do your thing and whip up some basic egg noodles to impress the crowds.

With the hard work done, all that is left is bringing the individual soup components together into a final product. In the recipe I suggest adding 2 cups of chicken meat to the broth and distributing the noodles into six portions. Feel free to adjust to your liking. You will most likely end up with a decent amount of leftover chicken meat. What did I do with it? I made a scrumptious chicken salad the next day, thanks for asking.

You don’t have to be under the weather for chicken noodle soup. Simmer a chicken to make homemade broth, roll out dough for fresh, hand-cut egg noodles, and bring it all together with vegetables and herbs to produce a hot bowl of soup for a wintry afternoon.