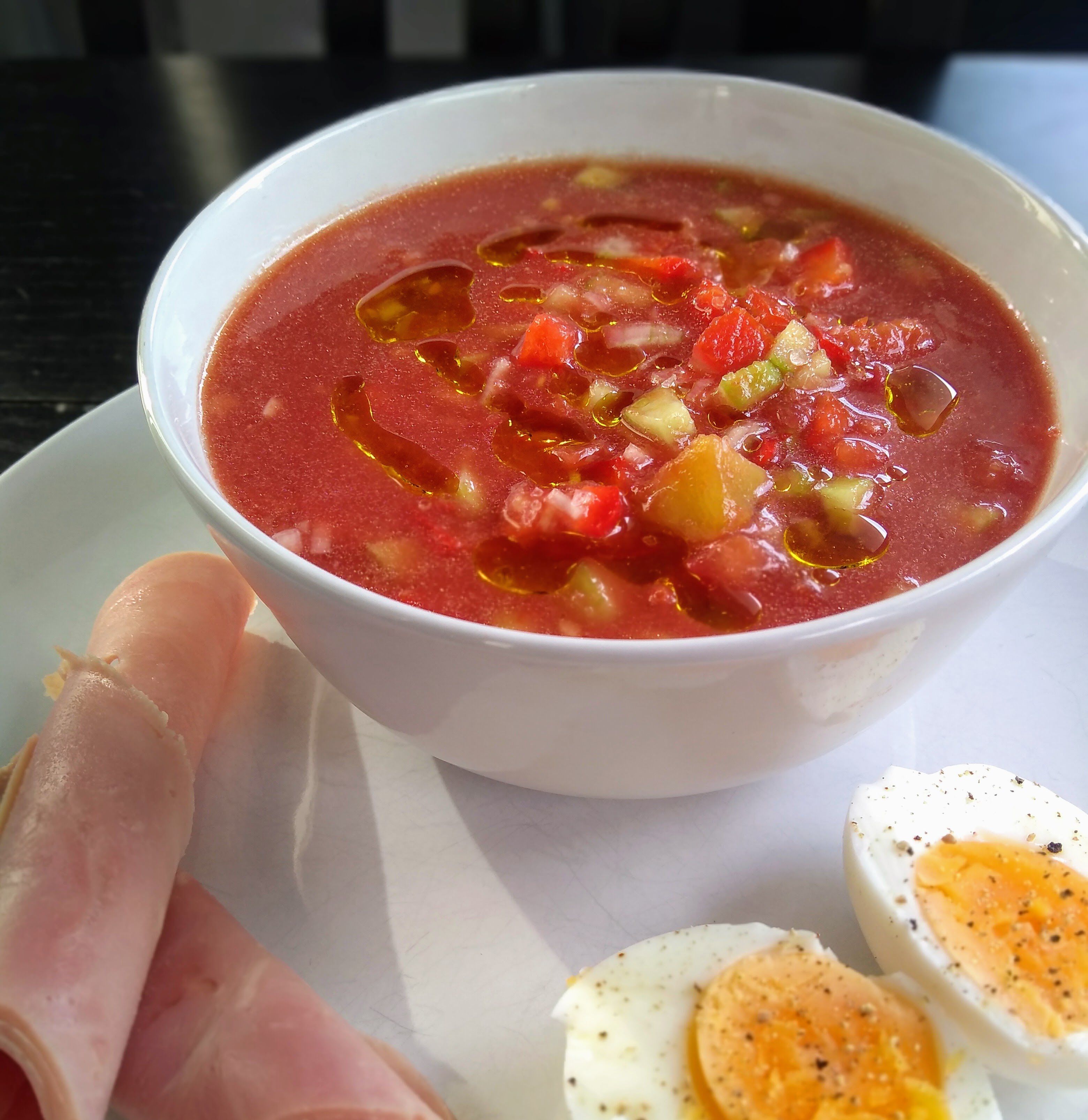 Chill, and don’t be in the soup.

Wander a few steps from the traditional version of this chilled soup by leaving out the bread and keeping the vegetables chopped instead of pureeing them. Go one step further by substituting shallots for onions. Let it all meld a while and you’ll have a harmonious bowl of gazpacho to enjoy on a hot day.

The world of chilled soup blows my mind. Normally soup is incredible in the dead of winter and torture for the tongue on a sunny summer day. Cold soup is the complete opposite. If this is your first chilled soup, welcome. Don’t let this one be the only one you try. Find the peach soups, the yogurt soups, the avocado soups, and the sweet corn soups, and your picnics will go from meh to ‘mazing.

There are two “B” words that are lacking in this gazpacho recipe: bread and blender. Let’s start with bread. I will admit I was completely surprised when I first learned that real, authentic, genuine, bona fide gazpacho features stale bread. Ignorance happens, you know. This version intentionally omits bread, but definitely try out some of the more authentic gazpacho recipes to get a taste of the real deal.

On to the blender. Gazpacho is normally pureed and thin enough so that it is sometimes even served in drink form. Again, this version strays from tradition and nearly cuts out all of the pureeing. I say nearly because you will puree a small quantity of the tomatoes to add to the liquid base. As indicated by the title, the majority of the vegetables are chopped and remain in that chopped state until the spoonful hits your mouth. I’m not against pureed gazpacho, but I’m definitely all for the texture and crispness of this chopped variation. So much that I decided to feature it here.

After a few years of making gazpacho with onions and feeling like the intensity of the onion flavor more often than not dominated in comparison to other present flavors, I decided to try leaving it out. The result was unsatisfactory. So what did I do? I tried shallots. When raw, I tend to prefer shallots over onions. The flavor is a bit sweeter and the intensity a bit less harsh. With that said, feel free to substitute onion for shallot.

When you combine all the ingredients in a bowl, make sure the bowl is non-reactive. The safest thing to do is to use a glass or ceramic bowl. Stainless steel should be okay, but what if you have that metal bowl in your drawer you think is stainless steel, and it’s really aluminum?? Combine tomatoes and aluminum and you’re talking discoloration, bitterness, and metal-flavored gazpacho. And that’s not cool. So, my suggestion is to go with glass or ceramic.

Wander a few steps from the traditional version of this chilled soup by leaving out the bread and keeping the vegetables chopped instead of pureeing them. Go one step further by substituting shallots for onions. Let it all meld a while and you’ll have a harmonious bowl of gazpacho to enjoy on a hot day.