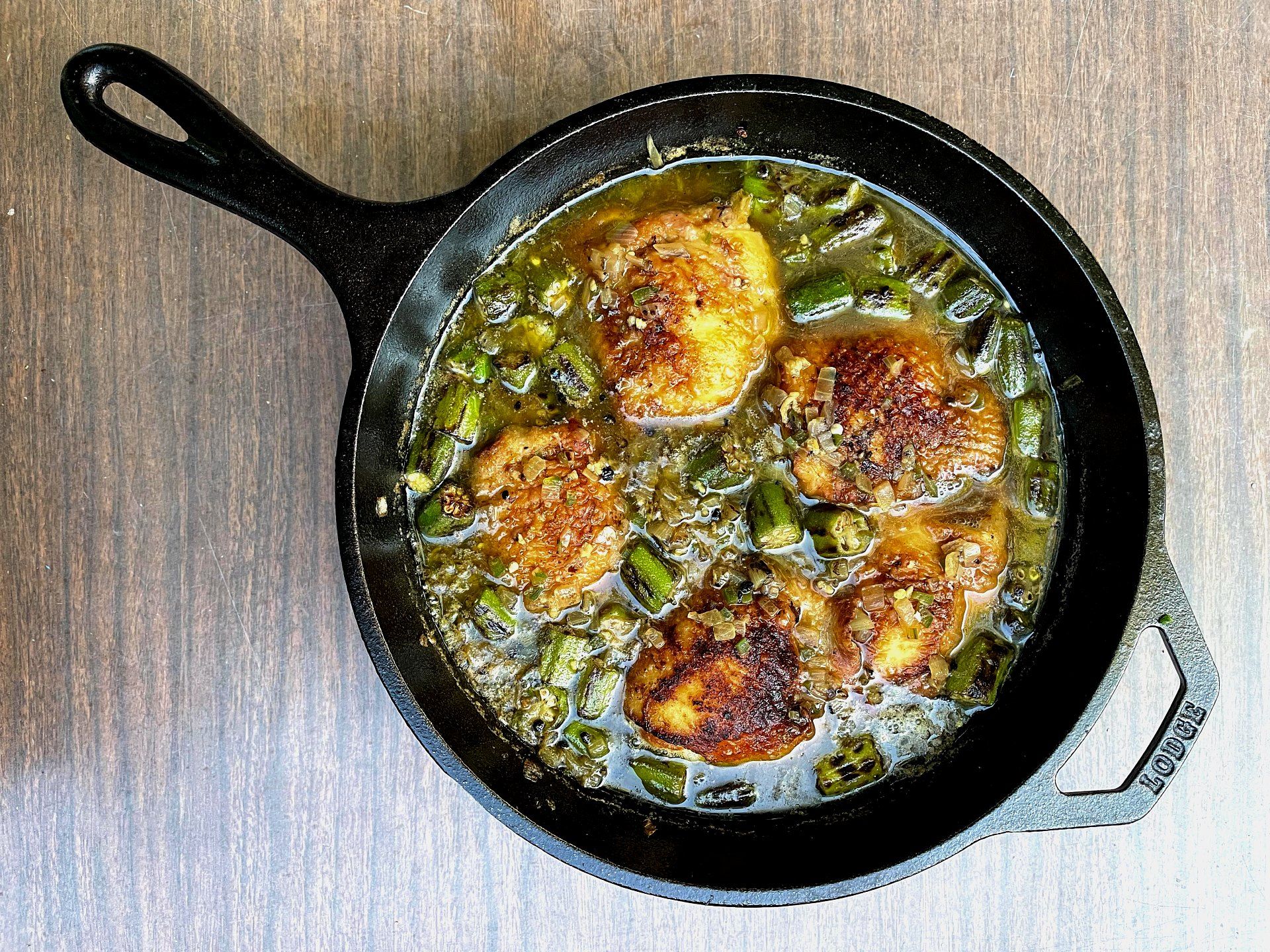 Okra doesn’t always have to be deep-fried.

Today you’ll get a taste from the Brazilian state Minas Gerais. Browned chicken thighs and sauteed pieces of okra come together in a rich broth to offer everyone at the table a comfort-style, earthy-flavored experience.

If you have a hunch that this is the first time okra is featured on Peel the Garlic, you are absolutely right. So let’s join together in welcoming okra to the family! And not to one up okra’s big achievement of the day, but this is also the first Brazilian recipe to land on the website. Unfortunately I have not yet had the chance to visit the largest country of South America, but I was recently having a conversation with a couple of my Brazilian friends who inspired me to have a go at Brazilian cooking. What you see here is the result of that cooking experiment.

I’m first going to talk a bit about our new okra friend, and then I’ll go into more detail about the dish you will be cooking today.

I honestly don’t know if I had ever consumed okra in any form other than deep-fried before working on this recipe. Growing up in the South of the United States, seeing crispy, deep-fried okra as a side dish at weekend cookouts was fairly common. And it’s good like that. Try it if you haven’t.

The okra plant is a proud member of the hibiscus family. As a sidenote, if you’ve never tried any sort of hibiscus flower drink, you should! Hot, cold, it’s all good. Anyway, the okra plant. The part of the plant you can buy at the supermarket is the okra seed pod, picked at a very young age. Apparently some countries refer to these pods as ladies’ fingers, but that’s funky. So I’ll refer to them as okra. Now, what do you find when you cut into okra? Seeds and slime, man. The slime may be one of the reasons okra isn’t a crazy popular ingredient like, let’s say, cucumber.

Technically, the slime is called “plant mucilage.” Mucilage is actually found in most plants. Okra just has a lot of it. What’s it for, you ask? It helps the plant store water. Now ask me no more, that’s all I know. Some dishes, like gumbo, actually take advantage of the okra slime and use it as a thickener. Other dishes, like the one today, try to minimize the amount of slime left when the dish is served. To get the okra pieces to release their slime, you will simply saute the pieces in a skillet for about 20 minutes. As they cook, the slime will leave the okra and mostly evaporate on the skillet surface.

I’m not going to act like I know a lot about the origins of today’s recipe, frango com quiabo, but I will tell you what I’ve learned in my research. The dish is from a southeastern state in Brazil called Minas Gerais. I’ve been told by several friends that Minas Gerais is known for its culinary scene. So would I like to visit someday? I would, and you can’t change my mind.

The idea behind Frango com Quiabo, or “chicken with okra” in English, is simple. Cook the okra and coax them to let go of their beloved slime. Brown the marinated chicken thighs. Concoct a rich broth from onion, garlic, jalapeño, and chicken broth. Then, combine it all together, let it simmer, and enjoy. The ingredients list is relatively short, and the steps aren’t all too complicated. You are ready for some Brazilian cooking.

Today you’ll get a taste from the Brazilian state Minas Gerais. Browned chicken thighs and sauteed pieces of okra come together in a rich broth to offer everyone at the table a comfort-style, earthy-flavored experience.