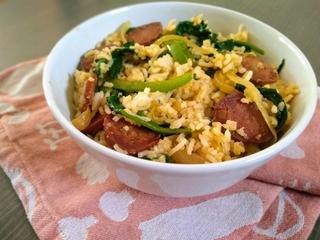 Take a trip around the world and you’ll find variations of chorizo all over. Today’s recipe features hard Spanish chorizo. After progressively frying the chorizo, bell pepper, onion, and garlic, the remaining infused cooking oil soaks into the rice and ensures a rich blend of flavors in each bite.

One of the core elements of the hardcore punk genre is the breakdown. It’s the musical moment when the screaming guitar riffs go quiet, the overall beat slows down, and the sludgy bass drum invites listeners to clump together for the classic mosh pit. Whether you like the angsty genre or not, take the opportunity at least once in your lifetime to listen to a hardcore song, wait for the breakdown, and let loose in your personal mosh pit.

Today’s breakdown is called the Chorizo Breakdown. Chorizo can be confusing. I’ve made a fair amount of chorizo blunders myself, so I’m going to share with you what I’ve learned about this poignant pork product.

First, chorizo is not only found in Mexican cuisine. In the United States, Mexican chorizo is definitely the most common type found at supermarkets due to the proximity of the two countries. It’s primarily seasoned with vinegar and chile peppers, and is sold as raw, fresh sausage. Go for a whirl around the world though, and you’ll find chorizo variations in Asia, South America, Europe, and the Caribbean. Say what.

In this recipe you’ll be using Spanish chorizo. Uh oh, there is more than one type of chorizo within Spain as well. Time for another Chorizo Breakdown. In general, chorizo found in Spain is fully-cooked. The difference lies in whether the sausage is semi-cured or fully-cured. Semi-cured chorizo is labeled as “soft” and is typically used in stews or grilled dishes. Fully-cured chorizo is labeled as “hard” and is what you will be working with today. Hard Spanish chorizo is similar in firmness to salami and can be sliced and served as-is.

What I’m trying to say with all this is that you cannot simply pick up a package of Mexican chorizo and substitute it in for Spanish chorizo. They’re different in so many ways, but they have the same name. Hopefully you see why the chorizo confusion is real, and hopefully my rambling has given you a dose of chorizo clarity.

Now a bit on the actual recipe. A few years ago I made a New York Times recipe that features chard and chorizo. Here’s the funny part. The recipe called for raw (Mexican style) chorizo. Being chorizo ignorant and living in a country that neighbors Spain, I used hard Spanish chorizo. This totally contradicts what I said earlier about chorizo styles not being interchangeable, but the dish was amazing. My error inspired the development of the recipe you are making today.

The rice bowl is rich in flavor. The white rice will soak up all the juice in the pan that comes from cooking the chorizo, onion, bell pepper, spinach, and lemon. This ensures that every bite contains many mini parcels of flavor. My main piece of advice is be quite vigilant when frying the garlic slices. Garlic can go from nearly raw to extremely burnt in a matter of seconds. Stir constantly and quickly remove the slices from the pan when the garlic is a light almond color. If toasted correctly, you’ll end up with a delectable, crispy garlic chip that will get crumbled into the rice bowl.

Take a trip around the world and you’ll find variations of chorizo all over. Today’s recipe features hard Spanish chorizo. After progressively frying the chorizo, bell pepper, onion, and garlic, the remaining infused cooking oil soaks into the rice and ensures a rich blend of flavors in each bite.