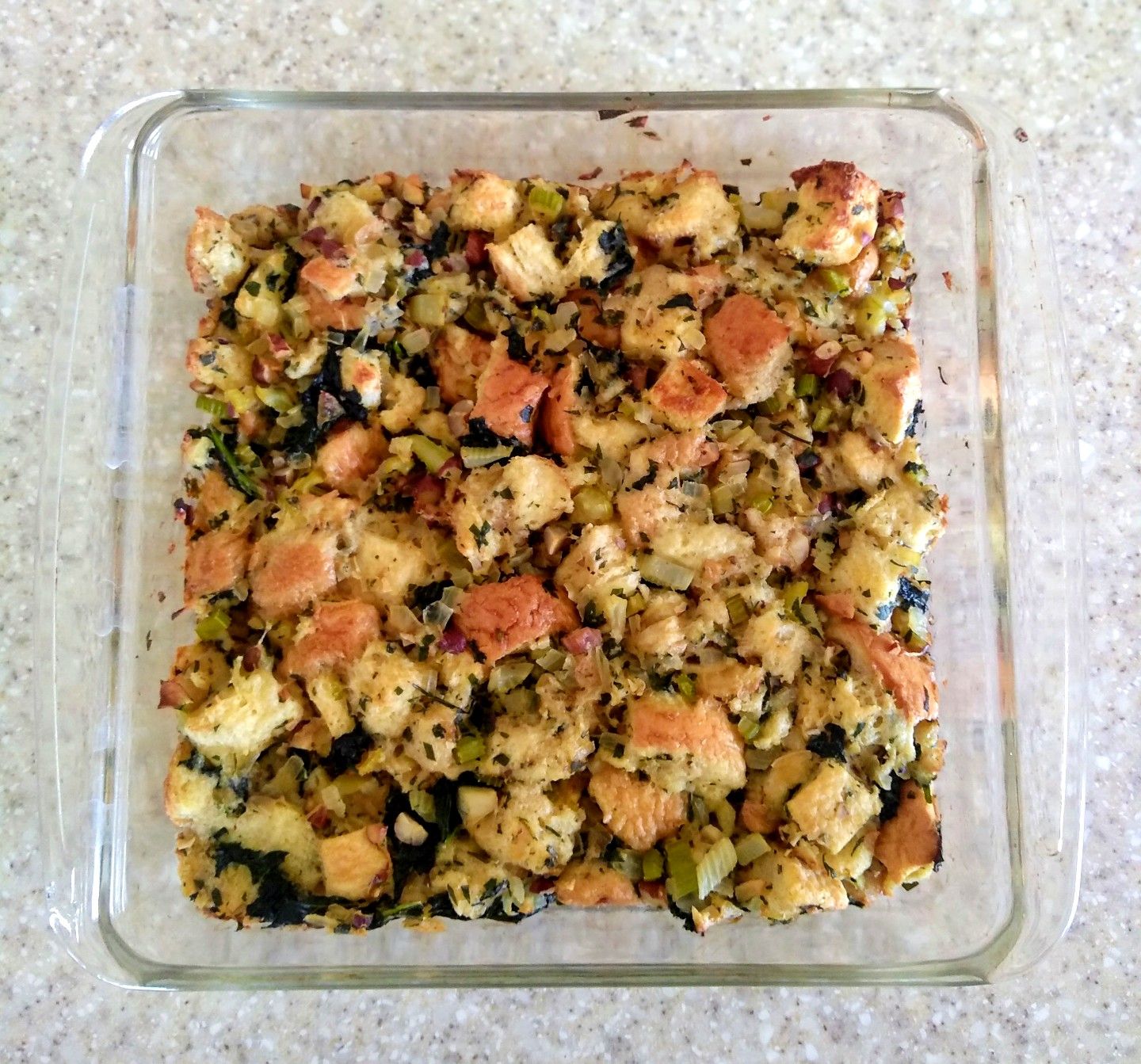 Kale at Thanksgiving is not traditional.

Thanksgiving is different this year. To go along with a non-traditional celebration of a traditional holiday, try mixing up your casserole dish of stuffing this week by including hazelnuts, kale, and garlic.

I just finished reading way too many bread jokes on the internet. Just so you know.

Nope. Today is all about that old baguette that's been sitting in the bread box for a few days. The one you might use in the neighborhood Wiffle ball game when the plastic bat goes missing (I’m exaggerating. And yes, I came up with this bread joke myself). Old bread is the star performer of many great dishes: panzanella, french toast, salmorejo (soon to be featured on a Peel the Garlic website near you), strata, bread pudding, annnnnd…stuffing.

This stuffing recipe varies ever so slightly from the classic. The quintessential flavors - celery, onion, sage, thyme, rosemary, and parsley - are all there. Don’t worry. The difference comes when you throw in hazelnuts, kale, and garlic.

Hazelnuts could be hit or miss for you. They are nutty and they are crunchy. If you want a soft bite of stuffing and won’t accept it any other way, this recipe is not for you. With the nuts added, every bite has a bit more texture than what you are probably used to. Try it! I did and I absolutely love it. The earthy flavor of the hazelnuts goes so well with the thyme, sage, and rosemary herbs.

Kale anywhere on the Thanksgiving table sounds whack. Well, here it is. For better or worse, the kale does not greatly affect the overall taste of this stuffing. The flavor is there, but since the kale is cooked, its presence is subtle. The reason I add the kale is because it brings a little extra life to the dish. This could be due to my colorblindness, but sometimes I look at a casserole dish full of stuffing and feel slightly bored by lack of visual contrast. Kale is so dark when it cooks, that it looks beautiful against the light color of the bread when pulled from the oven. Additionally, as I mentioned before, the subtle flavor of kale augments the overall complexity of flavors coming together in this recipe.

And what’s a recipe on Peel the Garlic without a bit of garlic, ya know?

I should say something about the chicken broth. I make this stuffing with full-sodium broth. Absolutely grab the low-sodium broth if you wish, but just remember that you might need to add a bit more salt than listed in the recipe. And one more broth-related matter. This is not meant to be an intensely moist stuffing recipe. If that’s what you want, pour in a bit more broth when you reach Step 6 of the recipe.

Let’s bring this whole blog post full circle and return to the old bread. Why old bread? Using soft, fresh bread is dangerous because it gets extremely soggy and falls apart as soon as you add the liquid ingredients. Using tougher bread that’s been sitting and drying for a couple days solves this issue. The cubes maintain their structure. The truth is though, it’s difficult to remember to buy bread a couple days before making a recipe. If this happens to you and all you have is soft bread, my suggestion is to cut it into cubes and throw the cubes in the oven for 5 or so minutes while the oven is preheating. The bread will dry out and give you the firm structure you want when adding the liquid ingredients.

Well, there you have it. A small-batch stuffing recipe for those years you have fewer people around the table. And if you do need to make a larger batch, double all the ingredient quantities and bake the stuffing in a 23x33 cm (9x13 in) casserole dish using the same baking times. Happy Thanksgiving and be safe.

Thanksgiving is different this year. To go along with a non-traditional celebration of a traditional holiday, try mixing up your casserole dish of stuffing this week by including hazelnuts, kale, and garlic.