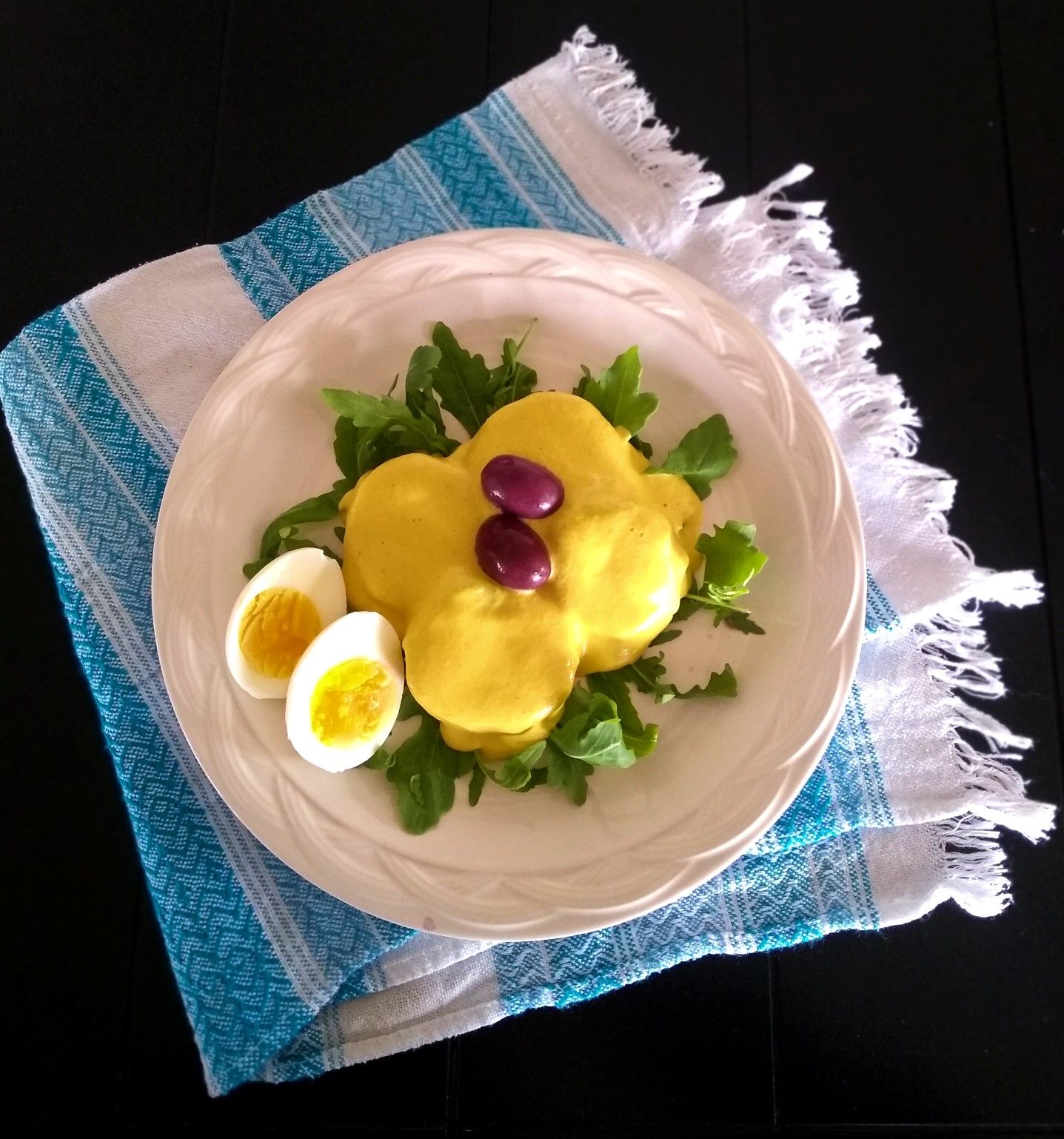 You win if you know why this sauce is yellow.

Ceramic pots from 200 AD, a family exiled from Poland, and one of the highest railroads in the world. This is the story of the Peruvian dish papa a la huancaína, an appetizer that smothers a bed of yellow potatoes in a rich, creamy and spicy yellow sauce.

Some 1,500 or so years ago, somewhere along the northern coast of Peru, a local artist from the Moche civilization sat at her stone table and painted a depiction of a pepper onto a ceramic vessel. That painted pepper represents the same pepper you will be using in today’s recipe: the ají amarillo. I’ll tell you more about the ají amarillo soon, don’t you worry, just know that papa a la huancaína wouldn’t be the same without it.

As is the case with so many dishes in the world, the origins of papa a la huancaína are debatable. Everyone agrees it comes from Peru, no question there, but exactly where in Peru is the real question. In the 1800s, a family in Poland was exiled for being rebels and standing up to the Tsars. Where did they go? France. One of the children studied engineering in France, became obsessed with railroads, and for some reason decided his skills would best be put to use in Peru. He made the journey to the southern hemisphere and ultimately became the designer of the Trans-Andean railroad that runs through Peru.

I spent nearly every minute of high school and university history classes doodling in my notebook, so if you are bored at this point, don’t feel guilty and just skip ahead to the next paragraph. Anyway, back to the Peruvian railroad and how it relates to today’s recipe. There is a city in central Peru, east of Lima, called Huancayo. In Spanish, something that comes from Huancayo could be referred to as “huancaína.” Are you making the connection? Some people claim that cooks from Huancayo prepared papa a la huancaína to feed the construction workers building the section of the railroad near the city. While that seems logical enough, other people say that papa a la huancaína was actually a dish that was sold at train stations along the route to Huancayo. WHAT IS THE TRUTH?

The history tittle-tattle is over. As promised earlier, I will now tell you more about ají amarillos. The Spanish word “ají” translates to “chile pepper.” The ají amarillo refers to a specific pepper (the Capsicum baccatum for all you biology nerds). It’s grown along the Peruvian coast and is the most popular and most consumed pepper in Peru.

Unfortunately ají amarillo peppers can be difficult to find outside of South America. If you’re the luckiest and live near a market that sells fresh ají amarillos, I’m very jealous. If you want to make me even more jealous, leave a comment rubbing it in my face. The next lucky option is that you can find the peppers in the frozen section of a specialty shop that imports South American products. The next best option is ají amarillo paste, which you can buy online. I have never used it (I fortunately have access to the frozen option), so do a bit of research before using the paste in a recipe. Lastly, for those of you who can’t find or refuse to pay the shipping costs to get the paste, I’ve seen recipes that use a blend of yellow or orange bell peppers and habaneros. It’s been years since I’ve made this dish with habaneros, but I know they have a higher Scoville rating than the ají amarillo and are therefore much spicier. Remember that when substituting.

Once you have figured out the pepper situation, the only other product that can be tricky to get your hands on is the jar of Peruvian olives. These olives, called Botija olives, are purple and have a relatively strong flavor profile. Fortunately the olives are just a side ingredient to complement the primary dish, so you can experiment and use another strong black olive.

When I lived in Peru I ate papa a la huancaína regularly. I fell in love with the sauce. I’m not going to describe it because I really want you to make it and experience what it’s like trying it for the first time. There is another dish in Peru, ají de gallina, that uses the same sauce and combines it with shredded chicken. If you like today’s dish, try that one next. So good.

Ceramic pots from 200 AD, a family exiled from Poland, and one of the highest railroads in the world. This is the story of the Peruvian dish papa a la huancaína, an appetizer that smothers a bed of yellow potatoes in a rich, creamy and spicy yellow sauce.