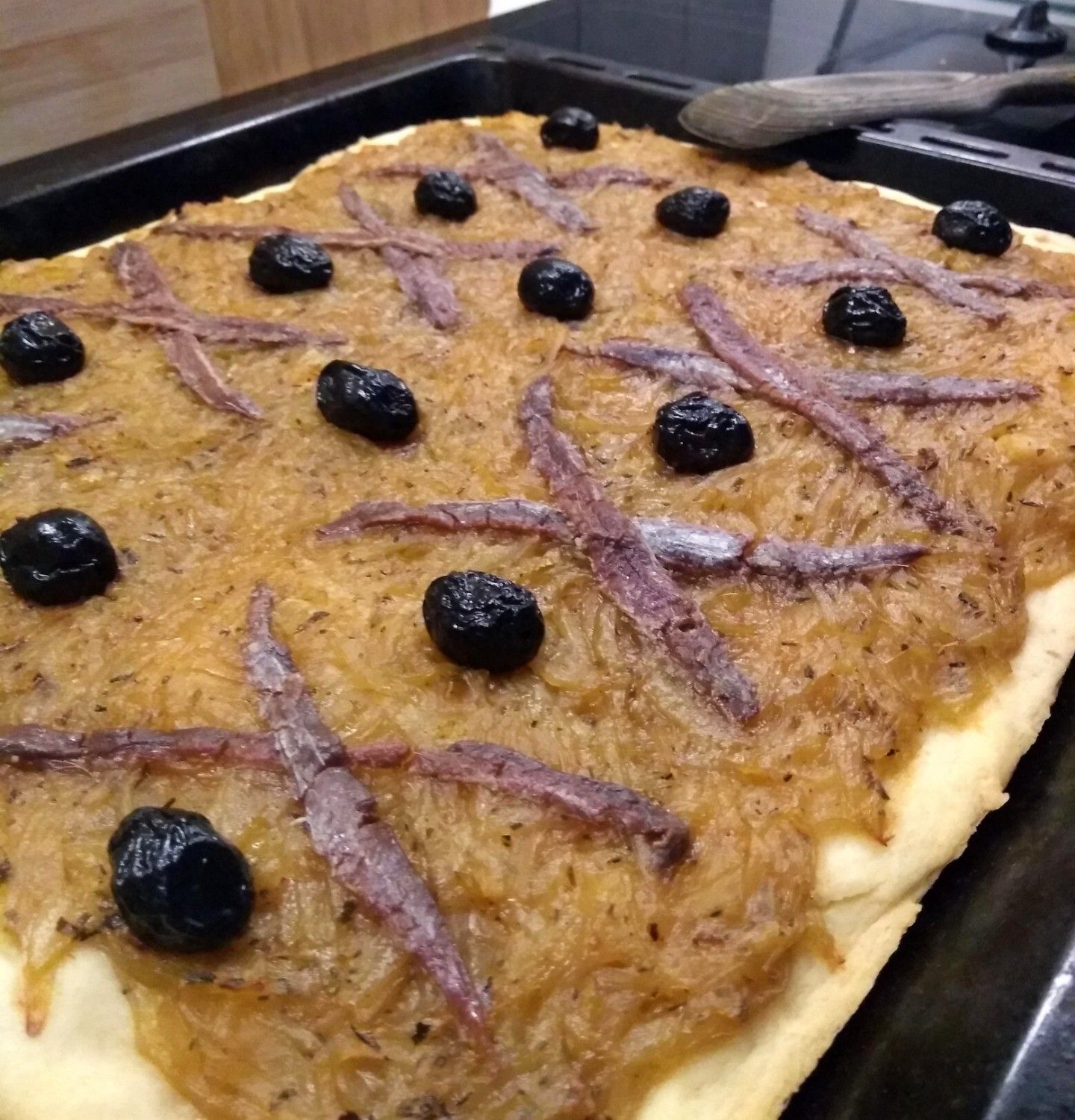 Have you met pizza’s Roman grandfather?

If you’ve never actually tried anchovies, here’s your chance. Some claim this is the original pizza. With a salty punch from the anchovies and olives, and a balancing sweetness from the caramelized onions, Provençal locals say pissaladière is an excellent appetizer to pair with a glass of Pastis.

There’s an episode of Spongebob Squarepants where Spongebob and Patrick are talking to a pirate ghost who is making an attempt to scare them. Unphased, Patrick demands the ghost tell him the whereabouts of his pizza order. The ghost waves his hands, says, “Pizza? I’ll give you a pizza!” and magically produces a pizza box. Spongebob and Patrick open the box, look inside, and scream. Why? They find a pizza topped with anchovies.

Other than the Teenage Mutant Ninja Turtles, I feel like the cartoon characters of the 90s taught me that anchovies are the scum of the earth when it comes to pizza toppings. I’ve since learned that anchovies aren’t actually as frightening as I was made to believe. Today I’m going to introduce you to the original anchovy pizza and show you how it’s made.

The pissaladière was created by the Romans in the region that is now France and Italy. Living on the Mediterranean, one of the cheapest and most commonplace ingredients at the time was anchovy. At some point the little fish ended up on a baked, tart-like flatbread and became a popular dish. I’ve heard people say that pissaladière is the original pizza, but who knows? If you actually know, fill me in. So what is it actually? A shortcrust topped with caramelized onions, anchovies, and strong black olives.

While simple in ingredients, pissaladière is not shy when it comes to bold flavors. Just a heads up, this is not for the salt-sensitive. Anchovies are normally cured with salt and packed in a concentrated, salty brine. Additionally, the black Niçoise olives are also cured in salt, adding an extra oomph to the salt punch. With that being said, the base layer on top of the crust is made of caramelized onions, so expect a powerful contrast between the salty and the sweet.

A few tips about making this pissaladière. I encourage you to make the crust. If you decide you need a shortcut, you can always pick up some store-bought tart crust dough and skip the crust-making steps. If you do make the crust yourself (and I hope you do), just remember that the dough will not be sticky. This dough does not yield a tender crumb; the final consistency will be firmer and almost cracker-like.

When making the caramelized onions, know that the onions slices will lose their moisture and will greatly reduce in size. It will feel like you have way too many onions when you first slice them and add them to the pot, but just remember that your stockpot becomes a shrink ray when caramelizing onions.

Last thing. Presentation is important. Presentation is always important, but especially when making a pissaladière. You can see in the picture above that I went with an olive/anchovies-in-an-X alternating pattern. You could go with an argyle pattern, a radial layout, or even an abstract contemporary design. It’s up to you, just make sure those littles fishes look their best.

If you’ve never actually tried anchovies, here’s your chance. Some claim this is the original pizza. With a salty punch from the anchovies and olives, and a balancing sweetness from the caramelized onions, Provençal locals say pissaladière is an excellent appetizer to pair with a glass of Pastis.