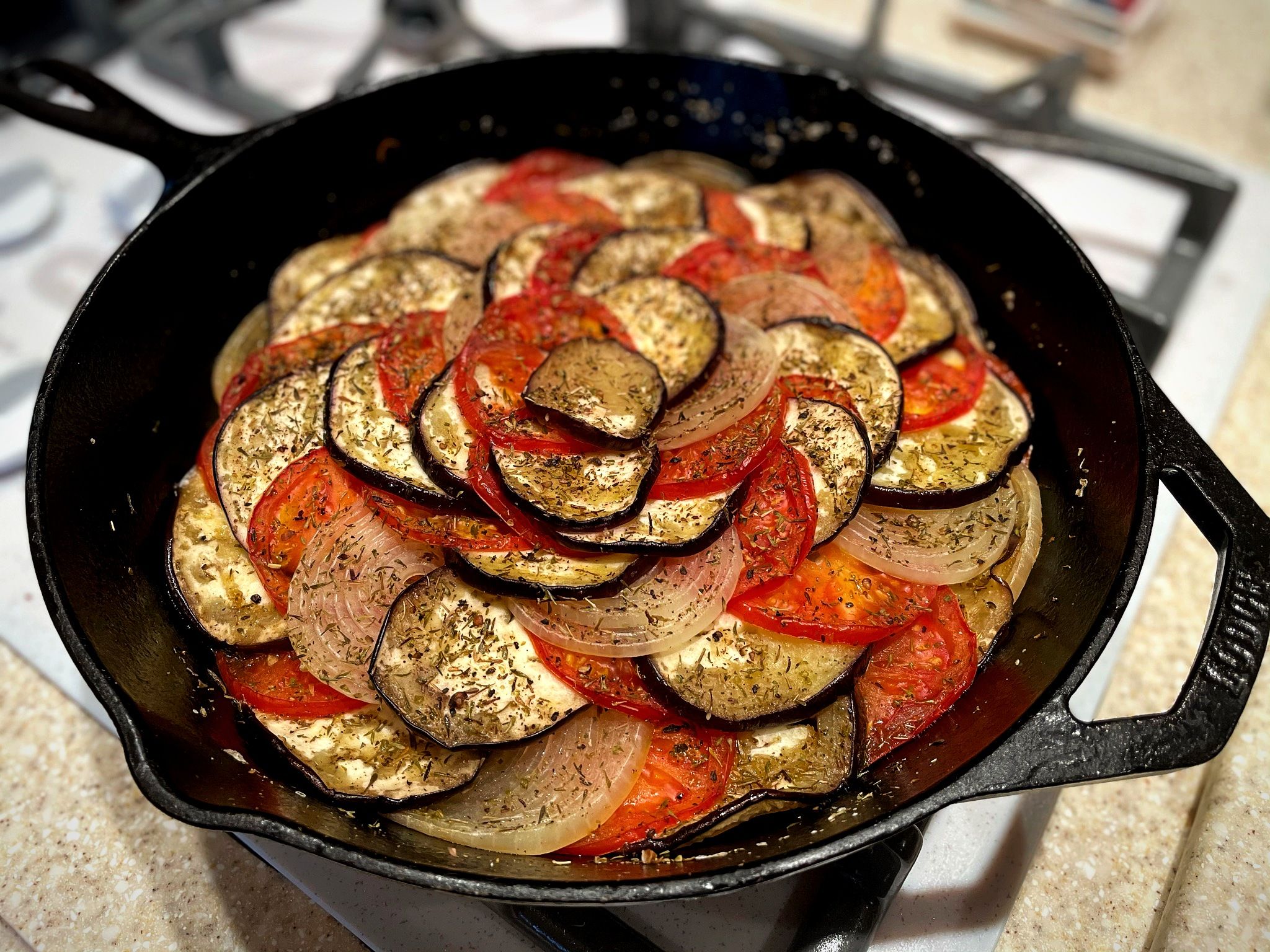 A layered sea of vegetables.

Spending at least an hour in the oven, the flavors of the layered tomato, onion, and eggplant will gracefully blend with the added seasonings and olive oil to create a melt-in-your-mouth masterpiece. Bring the meal to completion with a delectable serving of cottage cheese filled crepes.

Check out this fun rabbit hole. I was doing a bit of googling about the word tian, and discovered on the great Wikipedia that Tian is a popular surname in mainland China. Reading about Tian as a surname, I found out that there is a South African rugby player named Tian Meyer. He’s only six months older than me. Who knew. He plays for a team called the Cheetahs. They wear black shorts and orange socks as part of their uniforms. And with that, I put an abrupt end to my rabbit hole journey.

For today’s context, the word tian refers to the layered vegetable dish you are about to make. This can be a little confusing, because tian also refers to a literal, physical dishware made out of clay. What do folks in southern France traditionally cook in a clay tian? Well, tian, of course. See the confusion? If you own a clay dish in a truncated cone shape, the typical tian shape, feel free to cook today’s recipe in it. If you don’t (I don’t), a glass, ceramic, metal, or cast iron dish, combined with a watchful eye over the cooking time in the oven, will do just fine.

So, a tian in the French region of Provence is a baked dish usually consisting of layered vegetables. Usually no liquid, other than what is naturally found in the vegetables or other ingredients, is added to the dish. A few good slugs of oil, some seasonings, and the heat of the oven takes care of the rest. I know, I know, tis not quite the best season for many of the ingredients in this recipe, but my local winter was interrupted this past weekend with near summer temperatures, and I think I’m seasonally confused.

You don’t need a mandolin, but try extra hard to cut those vegetable slices super thin. A little focus and bit of patience can go a long way when slicing vegetables. Try it. When you arrange the vegetables in layers, have fun. If you search “tian provençal,” you’ll see many beautiful, circular arrangements. Another option is to layer the vegetables in rows in a rectangular dish. It doesn’t matter so much the shape or arrangement as long as the vegetables are layered and cut sufficiently thin.

The last tip regarding the tian is to keep it in the oven long enough. Long enough might be longer than you predict. It’s worth the wait. The tian is ready when the vegetables are melt-in-your-mouth tender. If you try to rush things, you’ll end up with an undercooked tian, and no one wants that.

Alongside the tian, you will be making cottage cheese filled crepes. Eating the tian alone isn’t a bad thing to do per se, but bringing in the crepe component rounds out today’s dish into a complete meal.

My suggestion is to initially put all your energy and attention into getting the tian into the oven. Once in, you’ll have at least an hour before chow time. This gives you ample time to make a nice stack of crepes, fill and roll them, and probably even be able to wash a few dishes before your oven timer dings.

Spending at least an hour in the oven, the flavors of the layered tomato, onion, and eggplant will gracefully blend with the added seasonings and olive oil to create a melt-in-your-mouth masterpiece. Bring the meal to completion with a delectable serving of cottage cheese filled crepes.