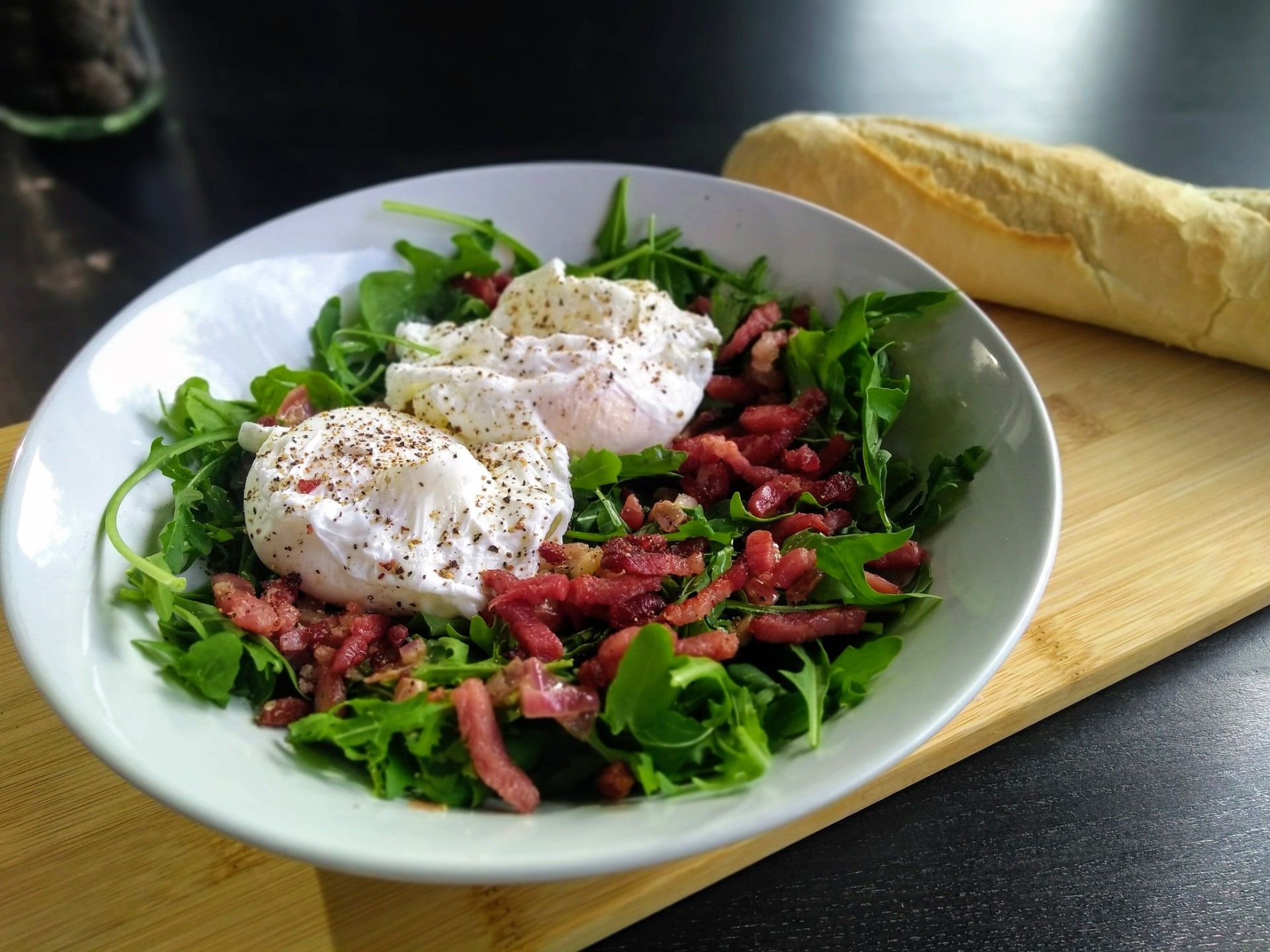 Thanks to the Mothers.

Poached eggs, bacon, and bitter greens, served with a mustard vinaigrette and a fresh baguette. This salad comes from Lyon, a city in eastern France with a rich cuisine developed by a group of women called the Mothers of Lyon (mères lyonnaises). Learn the ropes of poaching an egg, and throwing together a Salade Lyonnaise will be a breeze.

Mère in French translates to mother. In France during the 18th century, the word mère became a title for a female cook. Why is this important? In Lyon, a city in the east of France, the mères ran the culinary show, not their formally trained, potentially pretentious male counterparts. The mères grew in number during the Great Depression when women, recently fired as cooks for bourgeois families, banded together and joined the crew. The mères of Lyon helped define the gastronomy of Lyon. Remember that.

A few years ago I spent a year living in Lyon and got my first taste of the regional cuisine. The city itself has a couple dozen traditional restaurants called bouchons, where you can order dishes that were developed by the original mères. Eel stew, pork offal sausage, praline tart, tripe soup, blood sausage with warm apples, it’s all there for you to try. One of the most popular dishes, and the one we are making today, is Salade Lyonnaise. Think comfort food, think Salade Lyonnaise.

Overall, the salad is a relatively simple combination: bitter greens, fried bacon, poached eggs, some bread, and a vinaigrette. Eating it, though, feels anything but simple. You cut into an egg, and the rich yolk spills onto a few crips leaves of arugula and salty pieces of bacon. Seizing the opportunity, you use your fork to claim that perfect bite. Immediately you sense the sharp tang of the white wine vinegar and mustard vinaigrette. Soon after, the warmth of the creamy yolk and the fatty bacon mix with the bold bitterness of the arugula to round out the savory experience. Then, you do it again. At the end of it all, you use pieces of your warm, fresh baguette to sop up the remaining dressing and yolk from the bowl.

The most difficult step in preparing this salad is the poached egg. Poached eggs can be moody. I am not professionally trained in the ways of the egg, and by no means am I an expert, but I can share what I have learned through experience regarding what works best for me when poaching an egg.

While you’re heating the water you’ll use for poaching, find a small teacup or a heat-resistant measuring cup. I usually do this with a ½ cup measuring cup. Crack one egg into the cup. Make sure whatever cup you use has a decent handle, as you’ll be gently tipping the egg from the cup into the water.

The first few times I poached an egg I did it with the water at a full on, rolling boil. Don’t do it. You can bring the water to a boil, but reduce it to a simmer before even thinking about adding an egg. Once the water is simmering, add the vinegar. The vinegar makes the water more acidic, which in turn helps coagulate and firm up the egg white quicker, which helps the egg keep its shape, which is awesome. Some people vote no when it comes to vinegar. I vote yes.

So the vinegar water is simmering, your measuring cup has a raw egg in it, and you’re feeling ready to poach. Take the measuring cup, lower it to the surface of the water, and gently dip the egg into the water. You don’t want your egg going for a skydive. There should be no dropping. Think of what it’s like to gently lower yourself into a hot tub. That’s what the egg should experience. I usually poach a maximum of two eggs simultaneously. Any more than that and the pan gets too crowded and the quality of the poached eggs seems to decrease.

The rest of the salad is pretty easy to put together. I mention lardons in the list of ingredients. This is an extremely common ingredient in France. It’s just slab bacon cut into matchstick pieces. So find some very thick slices of bacon, and cut them into matchsticks.

Good choice deciding to make this. The mères of Lyon would be very proud of you.

Poached eggs, bacon, and bitter greens, served with a mustard vinaigrette and a fresh baguette. This salad comes from Lyon, a city in eastern France with a rich cuisine developed by a group of women called the Mothers of Lyon (mères lyonnaises). Learn the ropes of poaching an egg, and throwing together a Salade Lyonnaise will be a breeze.