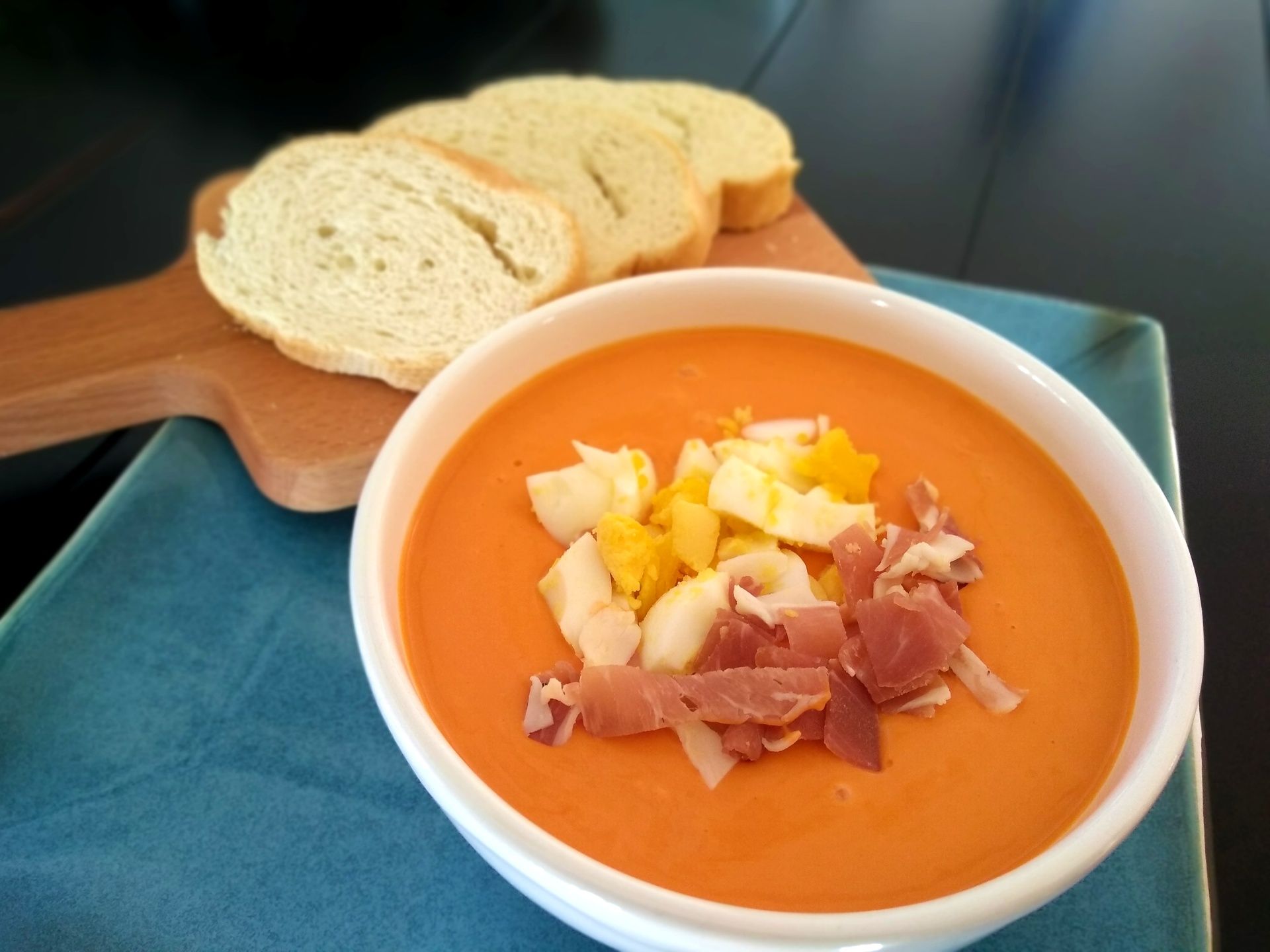 Cold soup of the day.

The southern region of Spain called Andalusia has quite a bit to boast about: the largest wooden structure in the world, flamenco, and today’s recipe, salmorejo. Composed of a simple blend of tomatoes, bread, and olive oil, salmorejo can be enjoyed as a standalone meal when served with the classic hard boiled eggs and prosciutto.

A few years ago, my friend and I had a two-week break from our jobs and decided to take a tour of Spain. One of our first stops was to a city in southern Spain called Seville. I have three very vivid memories from Seville.

Number one: wood. There is an outdoor structure called the Metropol Parasol that is supposedly the world’s largest wooden structure. It’s super cool, so look it up.

Number two: flamenco. Seville is the capital of the Andalusia region of Spain. Andalusia is where the music traditions of flamenco originate. On our second night in town, our host recommended we visit a nearby flamenco bar. We went in, ordered a drink, and joined the crowd at a wooden table. In the middle of the room was a guitarist and an old man singing a super sad song with energy like no other. The song ended, and suddenly everyone got up and followed the musicians out of the room and into the entryway of the bar. They motioned for all of us to move in closer and then started another song. The music was emotional, the crowd’s energy intimate, and the overall experience a gem in my mental bank of memories.

Number three: salmorejo. Today’s recipe. You may have never tried salmorejo, let alone heard of it. I hadn’t until I tried it in Seville. We were couchsurfing at the time, and we went for a walk around town with our host. On the walk, he took us into a bar. We stood at a high, round table, and ordered a few tapas, just like everyone else in the room. That’s when I had my first taste of salmorejo. I was hooked.

Salmorejo is one of Spain’s many cold soups. Back in August I shared my recipe for another excellent, non-hot soup from Spain called gazpacho. Salmorejo has a relatively short list of ingredients. It’s primarily composed of bread, tomatoes, and olive oil. These ingredients, combined together, give the soup its striking orange color.

You’ll notice the soup includes two cloves of garlic. If you want to go lighter on the garlic, use one. Either way, I’m going to fill you in on a garlic secret. Inside each clove of garlic is a thin sprout we call the germ. As garlic cloves age, the germ increases in pungency and can develop an acrid flavor. Removing the germ diminishes some of the unwanted flavors associated with raw garlic, while keeping the warm, spiciness that makes garlic so good. I’ve read that if your garlic is young and fresh, you can keep the germ without any negative side effects. If you don’t know the age of those garlic cloves sitting on your kitchen counter, however, maybe give this trick a try and send the germ to the trash.

Salmorejo is typically served either chilled or at room temperature. Don’t turn this into a warm soup, unless you’re feeling mega experimental. I’ve never done it and have no plans to. Some people treat the soup as an entire meal, especially if you include the chopped, hard boiled eggs and prosciutto. Other times, the soup is simply served alongside other appetizers, or “tapas,” as they call them in Spain. Whatever you decide to do, pat yourself on the back for adding yet another soup to your repertoire of cold soups.

The southern region of Spain called Andalusia has quite a bit to boast about: the largest wooden structure in the world, flamenco, and today’s recipe, salmorejo. Composed of a simple blend of tomatoes, bread, and olive oil, salmorejo can be enjoyed as a standalone meal when served with the classic hard boiled eggs and prosciutto.