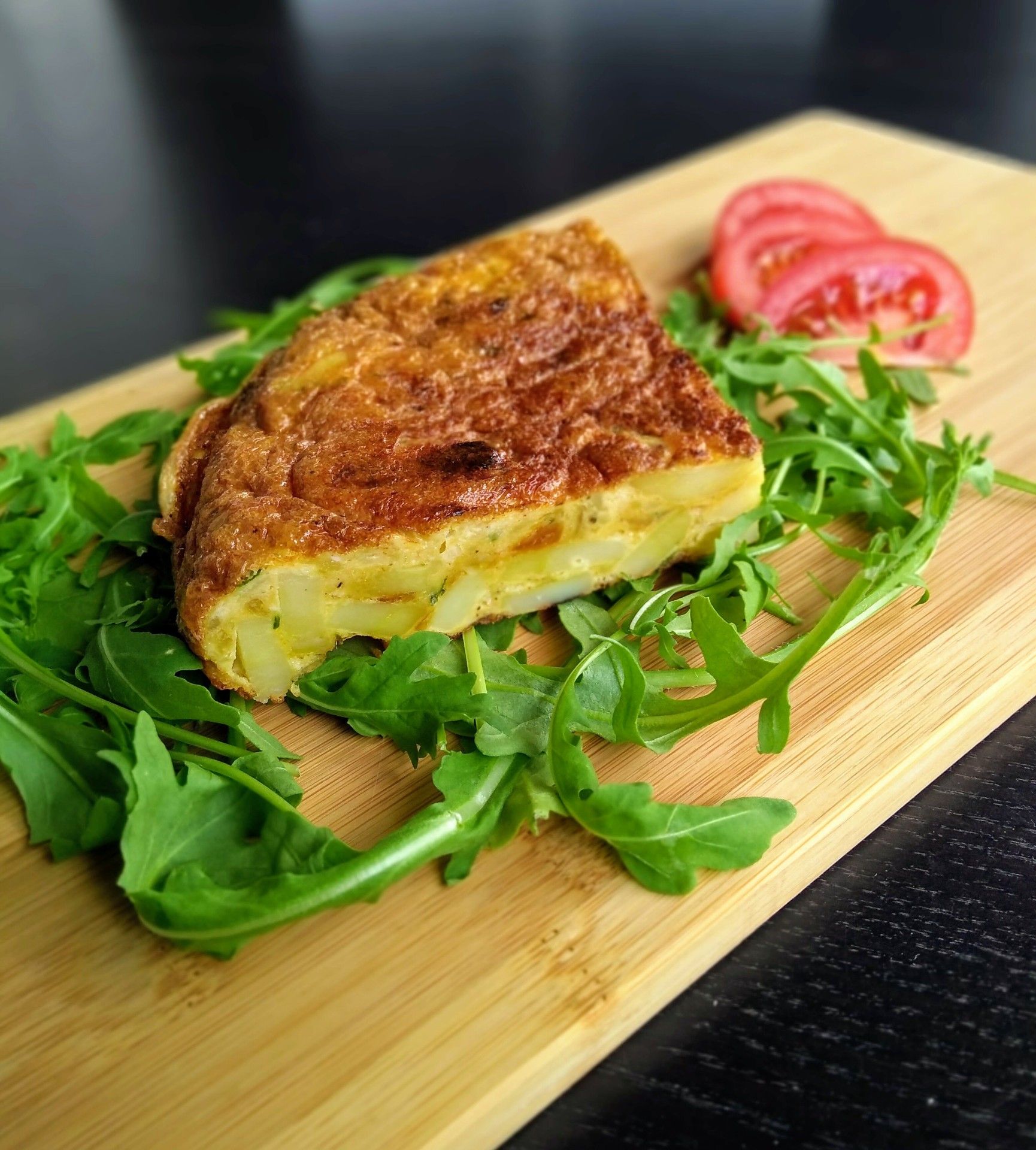 Also referred to as a Spanish omelette, this egg and potato dish pairs wonderfully with a side salad of bitter greens, tomatoes, and a sweet vinaigrette.

In 2014, a chef in Spain used over two tons of eggs and potatoes in an attempt to cook the world’s largest Spanish tortilla. Today, you’ll scale things down a bit and use a mere six eggs to produce a cozy, plate-sized Spanish tortilla you can call your own.

My brain splits a million ways during the last few minutes of cooking a hot meal. I think about how I will plate the food, in which order the food should be plated, if the table is set and ready, if the drinks are poured, if the cold components are arranged and served, etc. Cooking a Spanish omelette is different. Since you (generally) eat it warm or at room temperature, those last few minutes of cooking go from being stressful to blissful. And there’s nothing you can do about it.

I first saw a Spanish tortilla in a photograph in one of my Mediterranean recipe books. I cooked it and loved it. Later that year I traveled to Spain and couchsurfed at a woman's house who coincidentally was cooking tortillas with her friends for a party that night. I remember looking at a table full of tortillas, seeing that each one was noticeably different than the rest. Some were quite oily, some had more potato than egg, some were thick, some were thin, and one was wrapped in foil (huh?). To make things worse, everyone kept feeding me contradicting tips on how to make the best tortilla. Long story short, there are many correct ways of preparing a tortilla. And that’s good news indeed, for you and for me.

With that being said, here are a few tips based on my experience. Number one, don’t lose your patience during the half hour you are cooking the potatoes and onion. Oh boy, speaking of onion, it’s time for another sidenote. To include or not to include onion in a tortilla is a highly disputed matter among Spanish tortilla makers. I add the onion, but I won’t shame you for leaving it out. Anyway, patience is needed. You need to be fairly active during the 30 minutes of cooking the potatoes and onions or else something will burn and the potatoes will not cook evenly.

Flipping the tortilla can be a bit awkward at first. I speak from experience(s). I find that speed is my best friend during the process. When sliding the tortilla out of the pan and on to a plate, a slow slide could result in a dismembered, half-cooked tortilla. It happens. So be confident and make the transition quick. The same principle applies to when you actually flip the plate-tortilla-skillet sandwich. Rotate too leisurely and your tortilla might transform into a strange shape inside the pan. At the same time, be careful! You are grabbing a hot metal pan, and metal pans and glass plates are essentially frictionless; don’t let one slide out from the other!

Use your best judgement on when the tortilla is done. It’s a bit ugly to dig into the middle of your tortilla with a knife to test for doneness, but it might be worth it the first few times in order to gauge how long it needs to be cooked. And remember, no need to “serve immediately.” This one is best warm or at room temp.

Also referred to as a Spanish omelette, this egg and potato dish pairs wonderfully with a side salad of bitter greens, tomatoes, and a sweet vinaigrette.